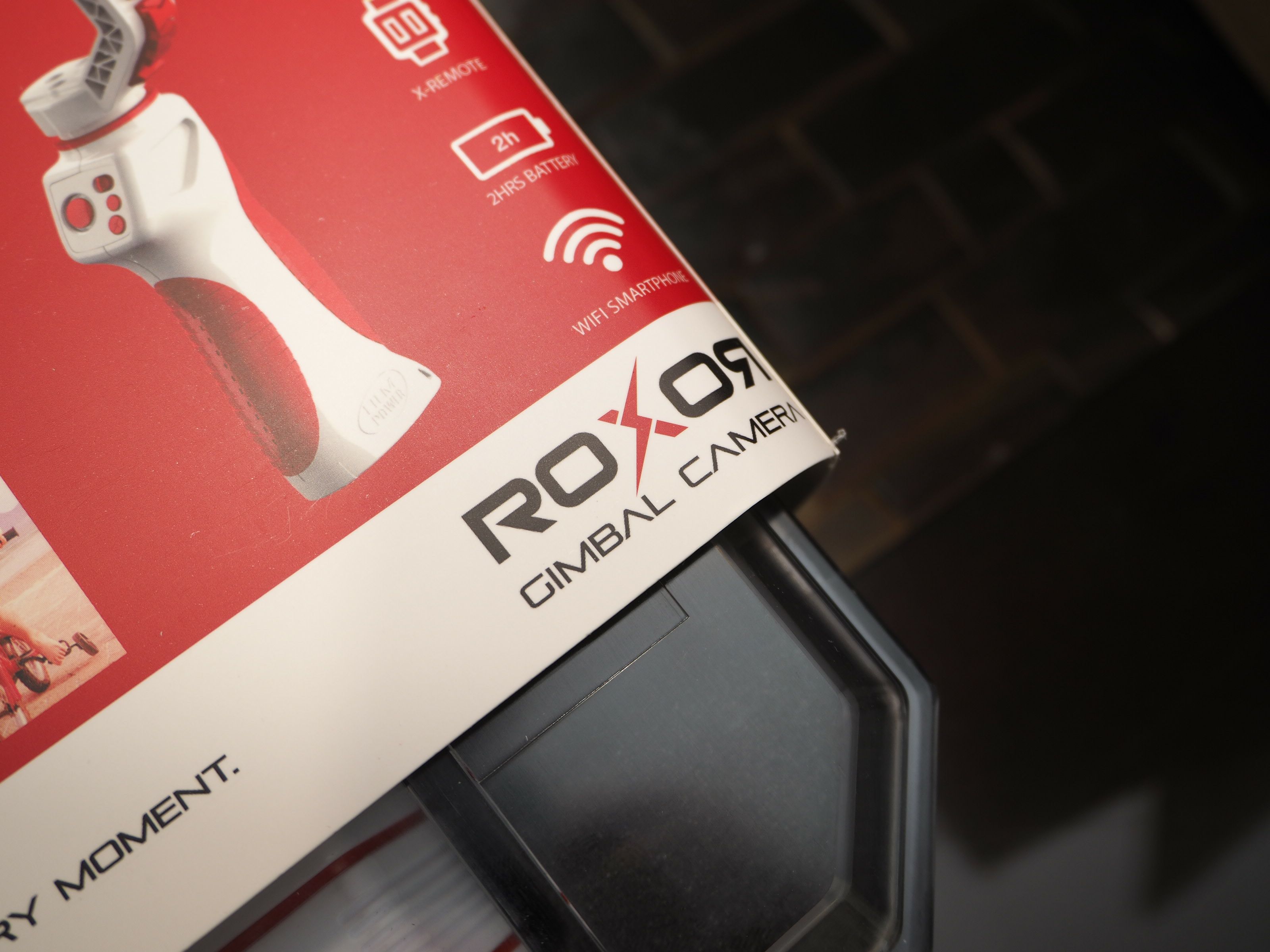 Today I will be reviewing the Roxor Gimbal Camera. I have a few cameras in my collection ranging from full-size DSLR type cameras to small action style cameras, and one thing they all have in common is their lack of proper video stabilization. I have tried to remedy this on my own by using “Steadicam” style stabilization systems but these systems require extensive balancing each time you make any modification that affects the weight or dimensions of your setup, like switching lenses etc. There have been breakthroughs on this front for a while now which have been mainly spearheaded by drone manufacturers such as DJI who brought us the popular Phantom line of quadcopters.

You have probably seen movies or commercials with aerial footage and may have wondered to yourself how they got the video to be as smooth as it is even though helicopters typically produce a lot of vibrations from their engines and gusts of wind. The magic behind those silky smooth cinematic sequences is also what differentiates the camera I will be reviewing today from all the other cameras that I have used before. The technology behind this magic is known as a Gimbal. If you have been following tech trends lately you may have heard this term thrown around quite a few times especially in the Drone world. The most popular type of Gimbal on the market right now is known as a “Brushless Gimbal, its name is derived from the three brushless motors that are used in the stabilization process. These motors are controlled by a unit that can determine what angle the device is being held and can also differentiate between intentional panning movements and accidental jerks. When the system is calibrated properly, it significantly reduces the vibration from quick movements such as running for example.

The most recognizable handheld gimbal camera device currently on the market is known as the DJI Osmo but it’s a little expensive with a price tag hovering close to $700 at the time of this review. After seeing a few reviews online I was dead set on getting an Osmo but then I thought about all the other goodies I could buy with that kind of money. Luckily for me there were alternatives. There was the option of using a GoPro and a compatible third party gimbal but that was going to be roughly the same price as the Osmo and more complicated. I did some research and realized that there was another alternative, this was the Roxor Gimbal Camera by Filmpower Inc. A small video stabilization equipment company based out of San Francisco, California. Sooo… being the cheapskate that I am, I decided to splurge on the Roxor camera, which was on sale for $199 during the pre-order phase and wished for the best.

If you’ve seen the DJI Osmo then you probably have a good idea of what the Roxor looks like. It’s pretty much a GoPro-style action camera mounted on a custom powered Gimbal head. The design works fairly well as far as its stabilization properties but the device does have a few quirks which include a separate button to power the camera independently of the gimbal, the tendency to “spaz out” for lack of a better term then the angles exceed 45 degrees, a bright red and white color scheme and I still haven’t figured out how to mount my phone as a secondary display.

Design of the Roxor

It seems that the folks over at Filmpower may have rushed the production of the device, using the cheapest materials possible to cut cost and profit as much as possible. The Roxor is made from cheap plastic and feels more like a kids toy than a device that costs $400. Don’t get me wrong, you do get a lot of bang for your buck but the overall quality of the device is severely lacking. It almost feels as if it fell from your hand it would just shatter into a million pieces. Then there are the accessories. Everything seems to have been pulled from the

factory part bin instead of being designed specifically for the device. The battery does not come with a charging station or dock of some sort, only an adapter that plugs directly into the side of the battery, which I have never seen before and actually seems a bit wonky when connected in such a manner. The included instruction manuals seem to have been printed with a regular home inkjet printer using a template from Microsoft Word or similar. The remote watch thingy feels very cheap and although it seems to work properly, it looks very ugly and you will want to immediately take it off once you’re done using it to avoid the weird questions and looks that you are going to get from passersby. The “Space-X” case actually has a fairly streamlined design, but like the Roxor its made from cheap plastic and will most likely shatter to pieces if it was accidentally dropped. I do appreciate the inclusion of a microfiber cloth because it helped me clean of all the “dust” that was on the camera’s display when I removed it from the box. The lanyard also came in pretty handy and clips on to a little notch at the bottom of the Roxor. One more thing that needs to be pointed out is that the Roxor is marketed as a 4K camera (like the Osmo) which it technically isn’t. It does shoot video at a 4K effective resolution but it does that at 10fps which is unusable for anything short of making a GIF and even then I don’t think I’ve ever seen any 4K GIFs anywhere.

Based on my experience, using the device seems to be fairly straightforward. The power-on process is a little weird as mentioned earlier in that you need to switch on the gimbal first, and then the camera after since it does not activate on its own. Once everything is powered up the camera will auto stabilize as long as it is calibrated properly. The calibration process should be completed anytime the device is not level. Calibrating the Roxor is accomplished by pressing the gimbal “mode” button five times with the Roxor positioned in a similar position to the image on the right. There is a directional thumb control which allows you to manually pan and tilt the Roxor, but remember not to exceed 45 degrees of roll or you will be in for a rude awakening. I can’t stress this enough, if you exceed 45 degrees of roll the Roxor will start doing something I call the Mr. Roboto gimbal twitch aka the Funky chicken camera glitch. All jokes aside, this is something that will ruin your videos and I’m not sure why it can’t be prevented in the programming of the device. For some reason, Filmpower Inc. thinks that a little warning note on their one-page instruction sheet will prevent the serious backlash they are going to have once this problem starts ruining people’s videos. Please fix this issue guys, if at all possible, because when someone is caught up in the moment of filming a once in a lifetime shot the last thing they will be thinking about is the degree of roll on their gimbal. Image quality on this Camera is also not the greatest. There is quite a bit of noise in low light situations and the dynamic range and color reproduction seems to be sorely lacking. Below is a video sample from the Roxor.

The video was stitched together in Sony Movie studio Platinum, no other edits.

Overall I like the Roxor for the price I paid during the pre-order phase. I do think that at the proposed price of $399 for this device is a bit excessive and I doubt that it will be any competition for the DJI Osmo, which is miles ahead in terms of expandability, build quality and just plain aesthetics. The Roxor, in my opinion, is a toy, It feels like one looks like one and behaves like one. That being said, it is fun to use as long as you keep within its limitations and its stabilization properties are miles ahead of many of the pricier cameras out there. One advantage that the Roxor has over the Osmo is the included LCD display. The Osmo requires you to constantly have your phone paired with it to view the output of the camera. This can lead to a somewhat tedious and unnecessarily bulky setup and defeats the intended purpose of the device. So, in closing, if you have a few dollars laying around and you can’t afford to get the Osmo but need the features that the Roxor has on offer, go for it. If you don’t mind having people snicker at you while they try to figure out “what the heck are you doing with that thing” the Roxor should be right up your alley. You will probably get weird looks with an Osmo as well, but the Roxor definitely stands out a lot more with its bright red and white color scheme. The only good thing I can say about the color is that people and the authorities won’t mistake it for some sort of advanced beam weapon and could potentially save some lives in the process. Give the Roxor a try you may like it, but me personally, I’m still in the market for an Osmo when the price becomes more reasonable.

Almond+ Review | Akiatech.com People love information, so much so that the great minds and the powers that be created the... Read More

Zotac GTX 1070 Mini I’ve always been a Nvidia Fanatic, my first card was the Vanta then I got a... Read More

Hands on Review of the Denon MC4000

Denon MC4000 Intro MC4000 right Jog wheel | The Denon MC4000 is the first controller to be released by the recently acquired... Read More